Click here for the minutes of our planning meeting at Small World Cafe on February 21st.

We are thrilled to share the news that Earl Beatty has been granted $2000 from the Toyota / Evergreen Learning Grounds Fund in support of our plans for the school's front yard landscape improvements. Thanks to all of you who have supported the efforts of the EcoTeam Greening Committee by donating items as well as helping out or coming to shop at the Honest Earl's Bargain Basement sales. In addition to the numerous bags of clothes that we have collectively donated to local shelters and charities, we have raised an additional $270 from the clothing that was sold through Ages and Stages (our local children's clothing consignment store on the Danforth) - bringing the total raised for this project to $4760!


So dig out those gardening gloves and sun hats, because plans are underway for Earl Beatty's spring gardening events! And please remember to save your gently used kid's clothing, footwear and sporting equipment for donation to the spring...
Honest Earl's Bargain Basement Sale:
Date: Sat. April 18th, 2009, 9a.m. -1 p.m.
If you can't hold onto these items until then, Ages and Stages will accept items in season for resale (just mention the Earl Beatty Greening Fund). More news on the sale and planting /gardening events to come in future Thursday folders and school newletters. And did we mention the amazing baked goods and delicious coffee served at the sales (compliments of Small World Cafe)...? Yum... good friends and good food... with 'green' sales and bargains galore... really, what else could you ask for?!

Click here for a larger version of the proposed site plan for Earl Beatty's front yard. 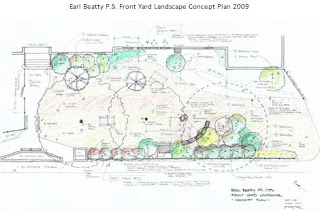