This blog has retired.
To keep up-to-date on what is going on at Earl Beatty PS
Follow us on Twitter: @BeattyPS
Or check out the school's website: http://schoolweb.tdsb.on.ca/earlbeatty/Home.aspx

Help Keep the Earl Beatty Garden Beautiful Over the Summer!

We are looking for families to commit to watering and weeding during one week in the summer. All the details are available on the sign up schedule and instructions. You can sign up by emailing your name and preferred week to Karen Diakun and she will fill in the schedule.

Thank you for keeping our gardens and shade trees in good shape for now and the future,
- The EcoSchool Garden Committee

The Earl Beatty GSA (Gay Straight Alliance) came together back in October, when we set out on a mission to promote a safe, accepting, respectful, positive, and loving environment for our school. 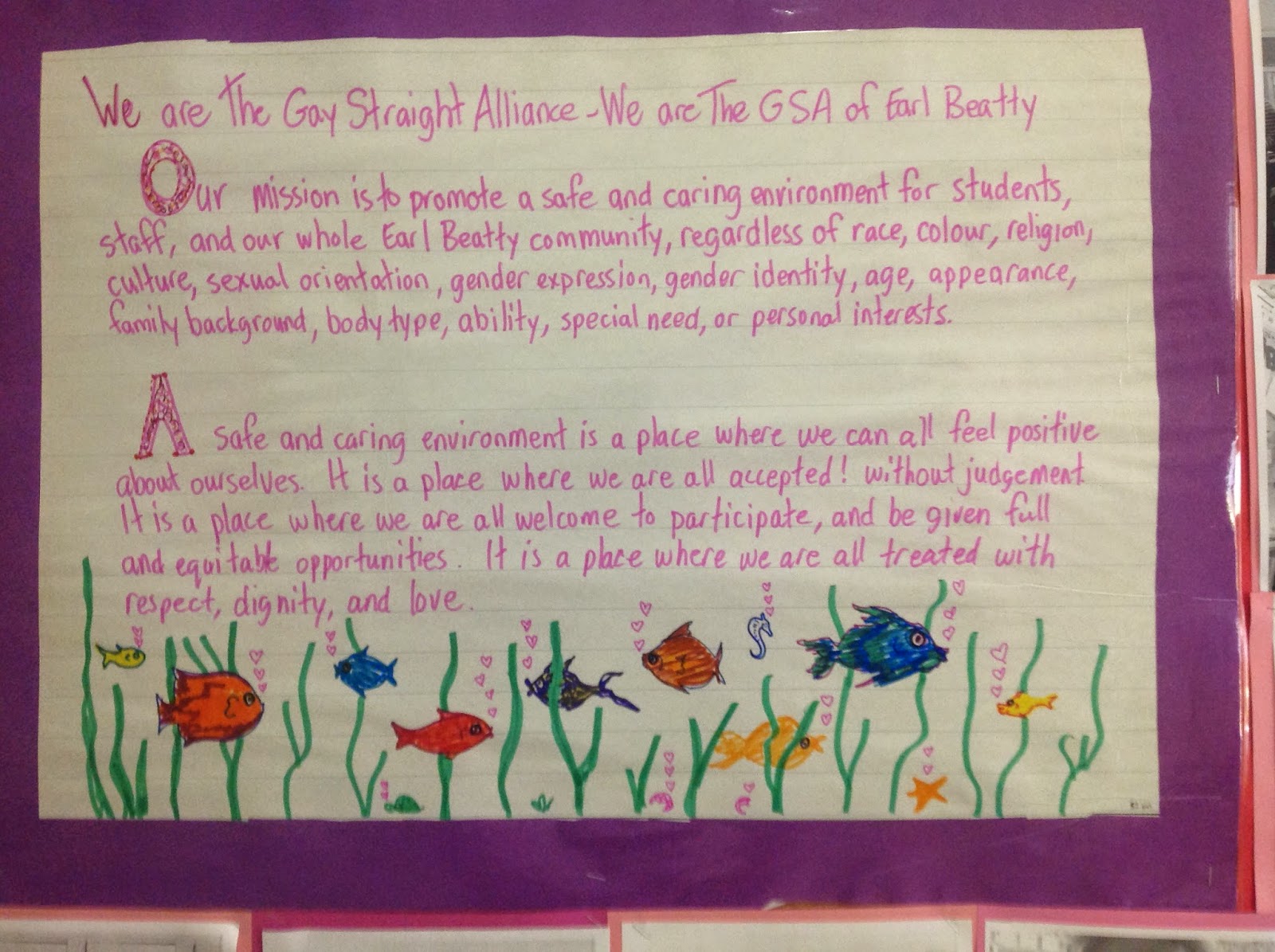 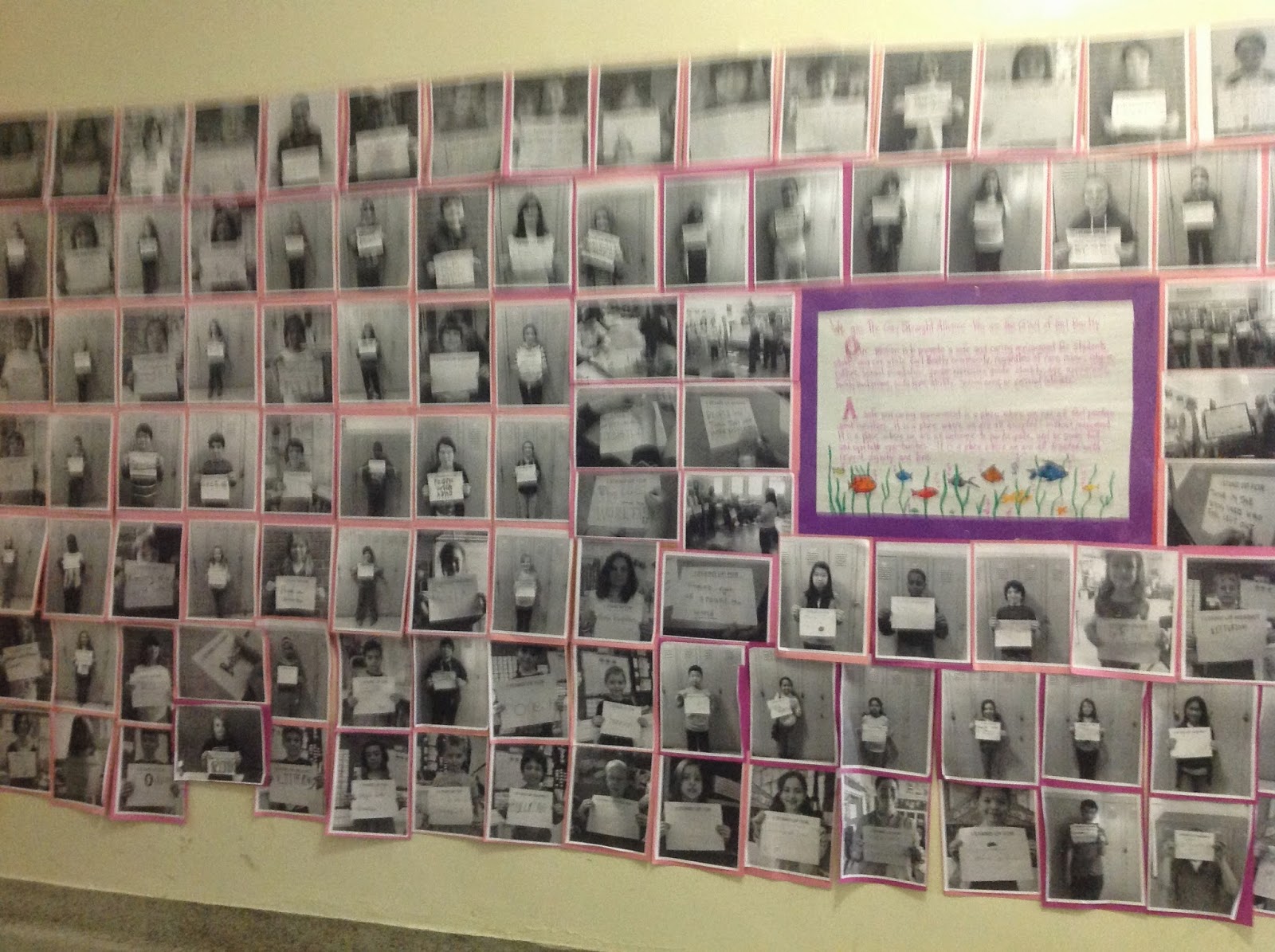 In our efforts to spread the word, we decided to create a "WE STAND UP FOR/WE STAND UP AGAINST" wall in our school. Students, staff, parents and guests were asked be photographed while holding up a message, to be included on our wall. Your children's photos are included among the hundreds we received. The response was phenomenal. Our wall, along with our mission statement, sends a powerful message spanning almost the entire length of our main hallway! 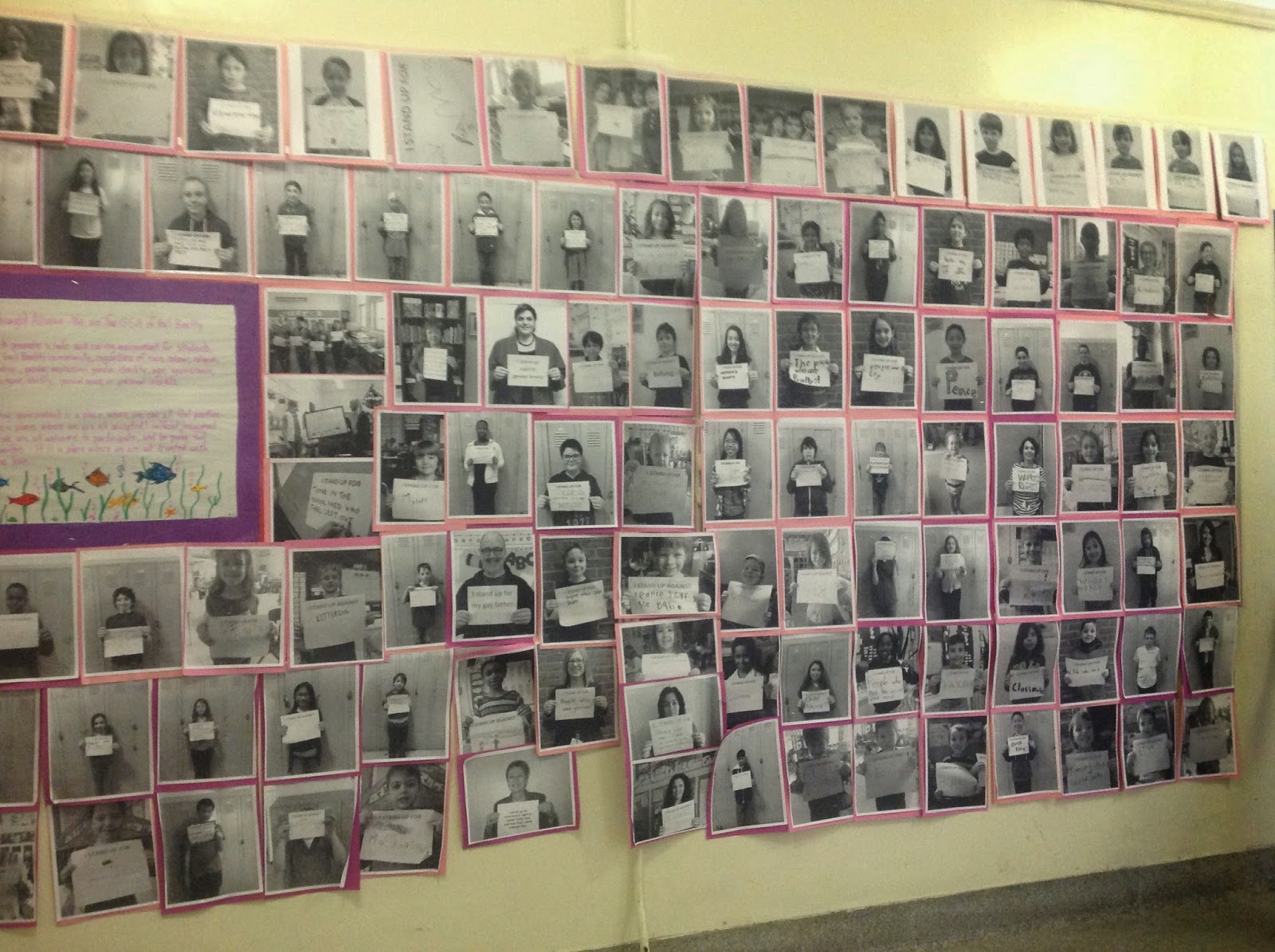 As you may already know, our school will be receiving the GSA Award for our efforts this year.  We are "tickled pink", as we celebrate the positive outcome of our objective.  Our work has only just begun, and we're excited, proud, pumped, and can't wait to continue with our GSA initiative next year. 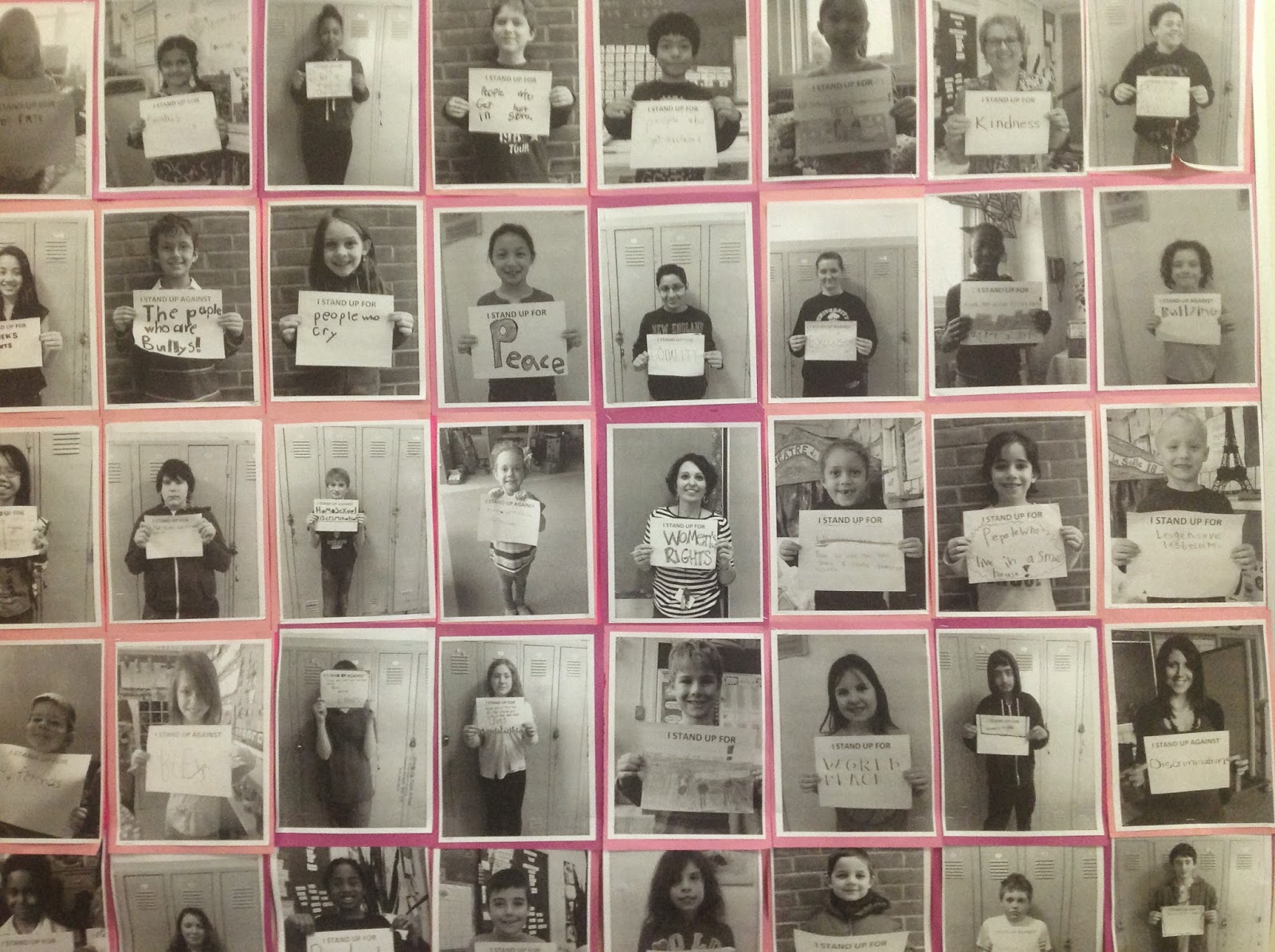 We hope you've had the chance to come and see our wall.  If you haven't, we hope you'll enjoy the attached photos. There's no doubt together we can all change the world.  Perhaps, in some small way, we already have!

Wishing you all the best, on behalf of the students in the Earl Beatty GSA, my co-leader Gordon Nore, and myself, Simmy Zaret
Posted by EB Blogger at 6/25/2014 12:58:00 pm No comments: 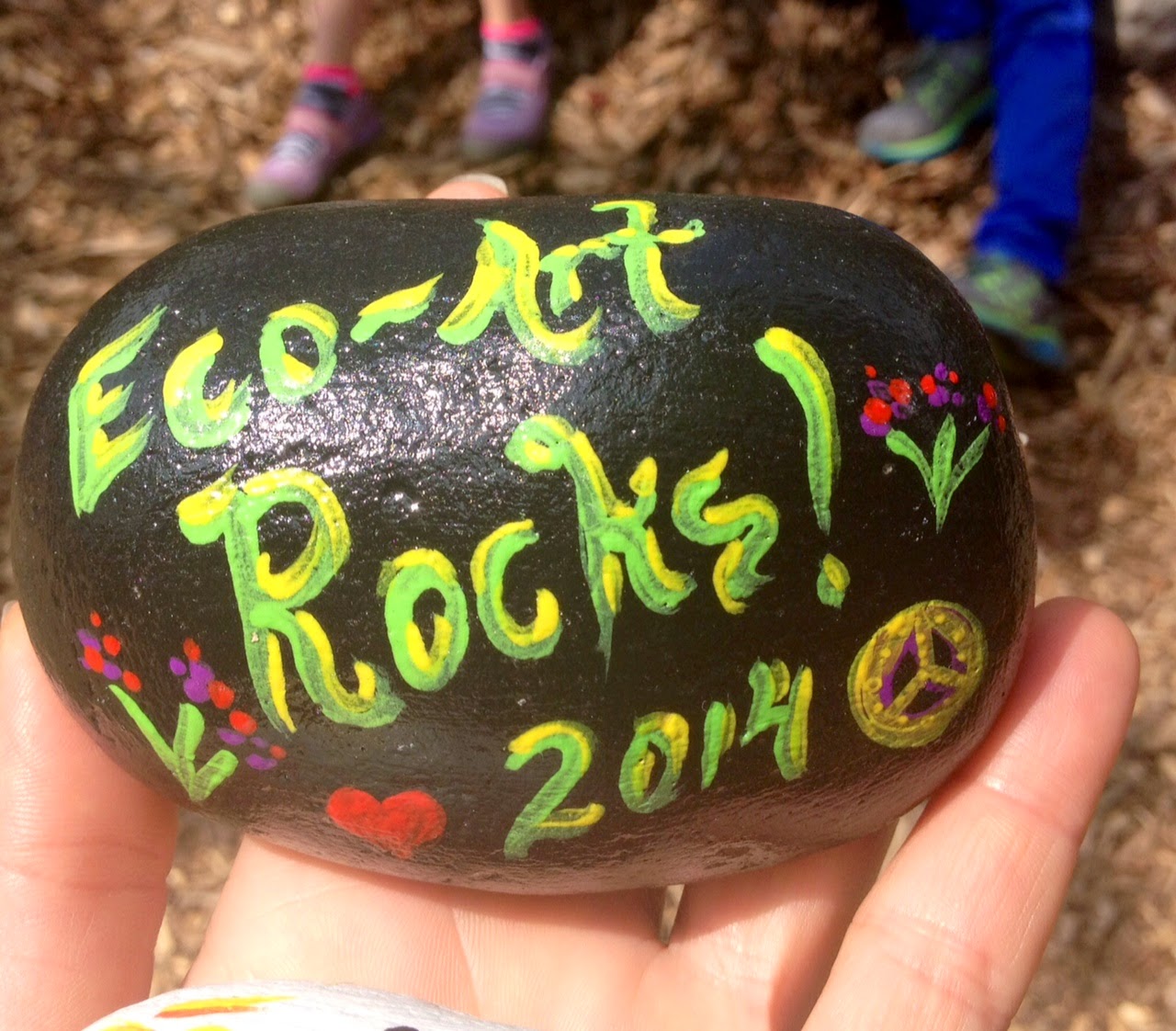 We enjoyed Rock Painting this spring, ending our meetings with a picnic lunch and a 'Rock Planting' session in the front courtyard gardens of our school.  Here, our works of Art are proudly displayed for passer-by's viewing pleasure. 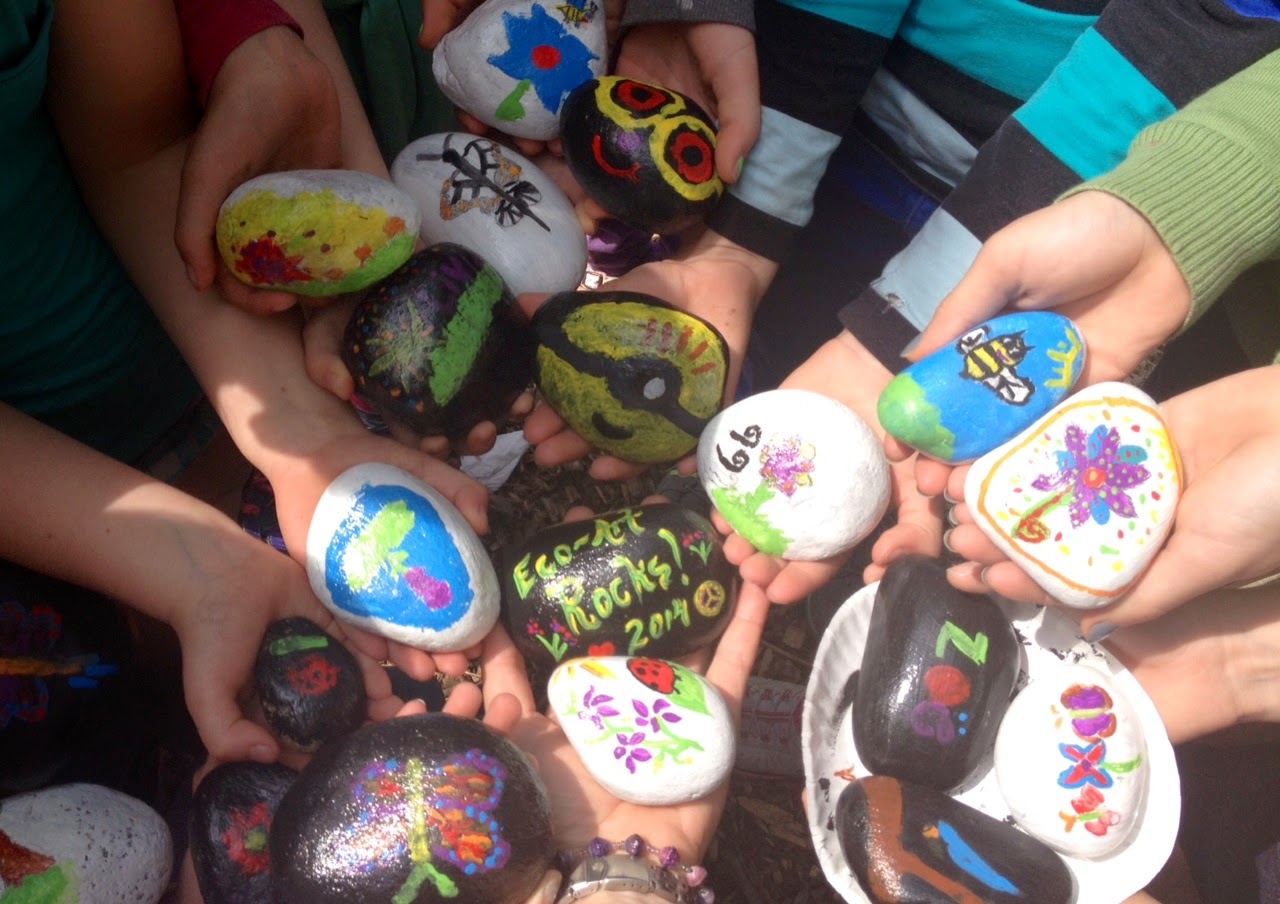 Thank you, young artists, for making Earl Beatty a more beautiful place to be! 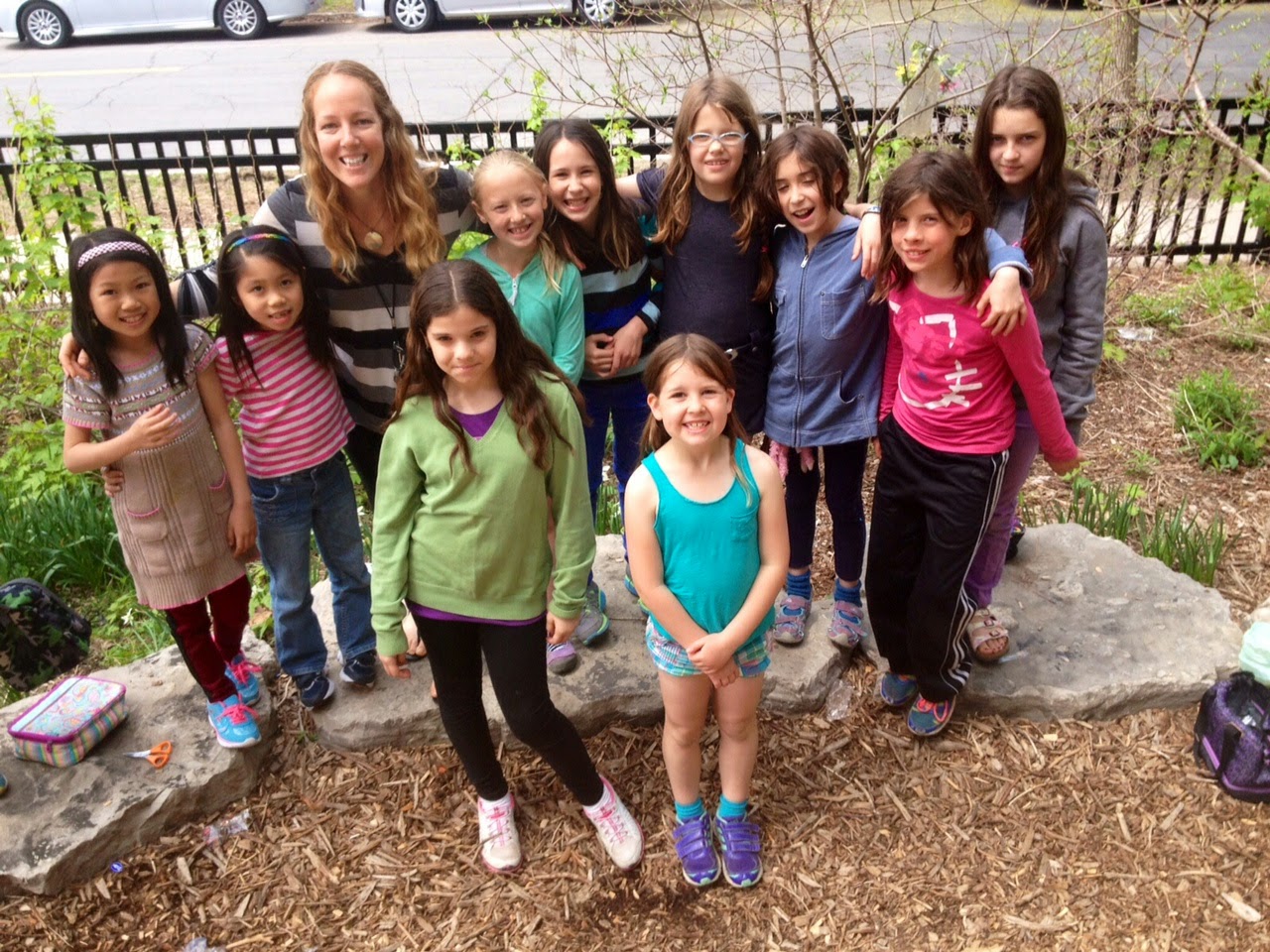 Thursday, June 19 will be the last Earl Beatty School Advisory Council meeting of the 2014/15 school year. At this meeting we will be thanking Ms. Fernandez for all her efforts at Earl Beatty over the last three years, and wishing her well in retirement. We will also be introducing our new Vice Principal, Kiera Vanderlugt, and our new Principal (TBA).Hope to see you there!

Over the past 6 weeks, the Eco Club members have enjoyed several guests who have visited. One week we had Mike come in to speak about energy conservation. Students learned ways that they can make a difference, for example, turning out lights when they leave a room. Eco Club members also learned about soil, worms and composting!

Another week, Karen came in and shared her passion with us about nature and gardening. The Eco Club took a nature walk around the school and collected some nature (sticks, rocks, leaves etc) which they later used to create some beautiful art work. Karen came back another week to further teach us about gardening. The students went out to the beautiful garden to do some gardening.

The beginning of June, Blair came in to speak about solar energy. The students were captivated listening his presentation. He taught the students about the importance of solar power and different ways we can use the sun’s power for energy. Students were very excited at the end of his presentation when he passed out colouring sheets and also some sunflower seeds to plant at home!

The Eco Club members are having a great year in this club.

Fundraing Plans for 2014/15 - Be Part of the Conversation

For anyone interested in discussing EBSAC fundraising plans for the 2014-15 school year, please meet at Sarah's (cafe/bar, NE corner of Danforth and Monarch Park) on Monday June 9 at 8 PM.The intention of the meeting is to gather input and generate ideas to bring to this school year's final Advisory Council meeting and for advanced planning of next school year's approach.We are not looking to collect volunteers or event leads - although you are more than welcome to raise your hand for these things! We are simply looking for ideas and input to help support and inform the council's planning efforts.
Posted by EB Blogger at 6/06/2014 11:10:00 am No comments:

The Director's G.S.A. Awards are designed to recognize and honour three outstanding trans-positive Gay-Straight Alliance Groups (G.S.A.) in the Toronto District School Board. Each year, three $1000 awards go to student-led groups that have demonstrated a committed effort in helping create a school climate that is safer and more positive for students and staff of all sexual orientations and gender identities.
This year's winners are:

Earl Beatty's GSA ran a fabulous poster campaign where students, teachers, and the community were encouraged to stand up for someone or some group they supported or stand against something that they believed was negative.

Posters adorned the first floor and were hugely impactful - really showing that Earl Beatty students care for their friends, their families, their neighbours, and people around the world. Together the Earl Beatty community is making their school and community a healthier, happier, safer enviroment for everyone.

We were impressed with all the work you have been doing and highlights of this work will be featured at an award presentation at an upcoming Board meeting (we will provide you with those details as soon as they are available).
Posted by EB Blogger at 6/04/2014 11:07:00 am No comments:


The school year is almost over, but before we all take a well deserved break let's thank our great teachers with a luncheon on June 20.

We would love food, drinks, treats and volunteers to help set up and clean up please!

Two amazing food trucks will be joining us for the day!

The Fun Fair needs your help!
We are in desperate need of volunteers. The commitment can be as little as an hour.  We need parents, 8th grade students, and high school students (we will give documentation for volunteer hours credit) to help run activities on Saturday May 24.
We are looking for help in most areas still, from the bake sale table to the bouncy castles, ticket sales to the sports equipment sale.  We also need strong bodies for set up (8 to 10 AM) and tear down (3 to 5 PM).
Please email if you can help: manalrussel@gmail.com or shawnacotton@rogers.com
We are also in need of donations for our sports equipment sale.  Please drop off any new or gently used skates, hockey equipment, baseball gloves, cleats, balls, goals, helmets, etc on Thurs, May 22 or Fri, May 23 from 8:15 - 8:45 AM or 3:30 - 4 PM by the main school entrance on Wolverleigh.  You can also drop off donations any time before May 24 at 36 Woodington Ave on the front porch.
One day left to sign up for the ball hockey tournament! May 16th is the deadline to register your child ($5) or adult team ($100).  Contact James Olejnik at jolejni4@toronto.ca.  Bring your registration form to Earl Beatty Community Centre by May 16th.

Help make this the best Fun Fair yet!

On Thursday, April 24, 2014 the City of Toronto Chief Planner hosted a roundtable that examined how our city can be planned to create welcoming spaces for families and children.

Rogers TV taped and archived the roundtable so everyone can watch and learn from the discussions.
Posted by EB Blogger at 5/07/2014 01:00:00 pm No comments: 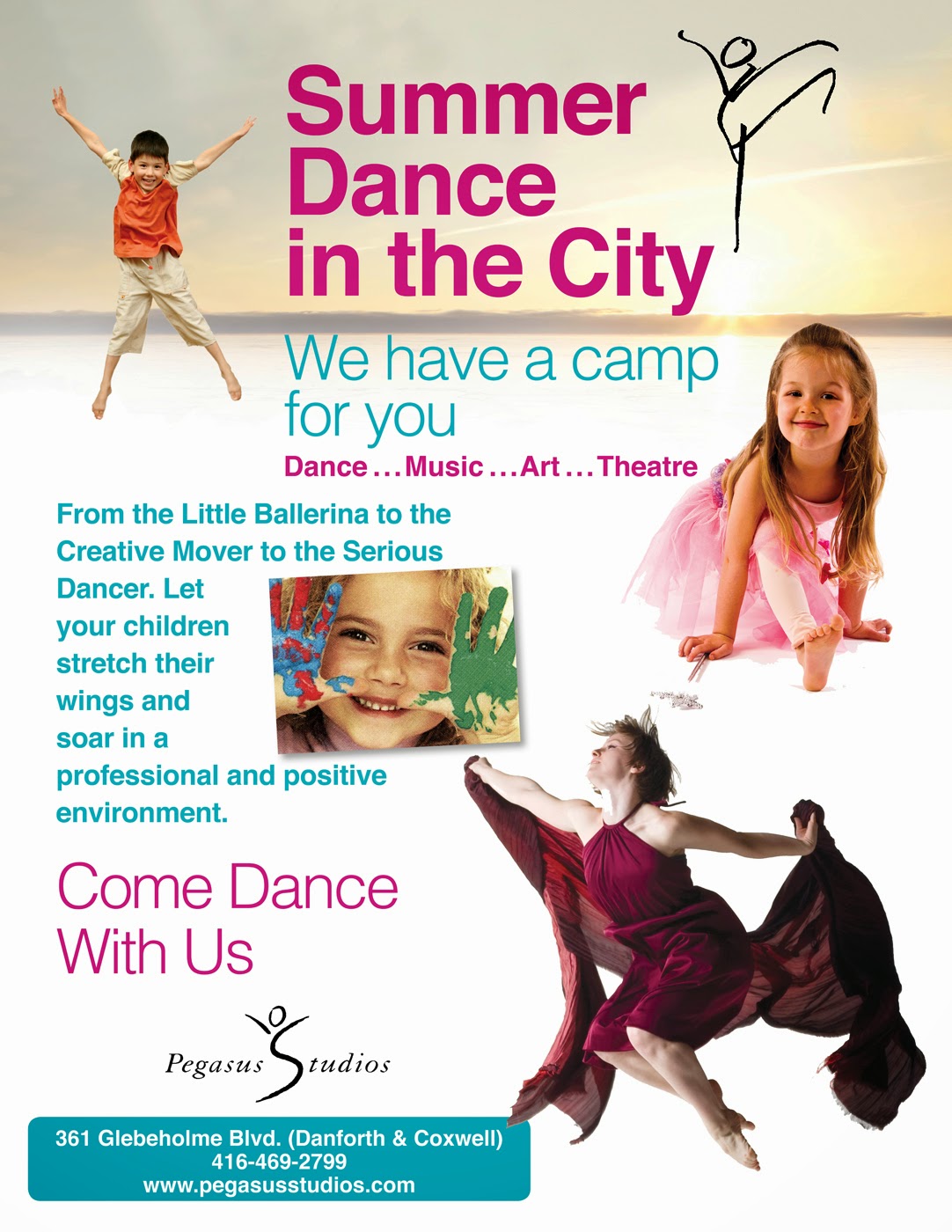 Parents are needed to be on hand to answer questions and share experiences with incoming families.

If your child is currently in Kindergarten (or was last year), the 2014/15 Kindergarten parents would love to hear from you!

If you are able to volunteer your time on the evening of Tuesday, 27 May, please email sturino@gmail.com.

Spring Concerts in May - Mark your calendars!

Please join us for Earl Beatty's
“Springtime in Canada”
Concerts
on
Wednesday, May 14th, 2014
in the gymnasium

No, worries, read the Minutes and catch up on what is happening in Earl Beatty PS!

Registration is based on first come/first serve and spaces are limited. Please register before April 18, 2014!

Breakfast with the Easter Bunny

Take your little ones to have breakfast with the Easter Bunny!

In addition to the Pancake Breakfast there will be The Great Easter Egg Hunt, Crafts and Colouring.

Spring is here (finally!!) and it is time to dig in!

Volunteers are needed to keep our school garden beautiful.
Can you help with weeding, watering, mulching, and planning for the futures?
All are welcome!
Contact Karen Diakun if you can pitch in!
Posted by EB Blogger at 4/04/2014 07:30:00 am No comments:

International Day of Pink is happening on April 9, 2014

Day of Pink is the International Day against Bullying, Discrimination, Homophobia and Transphobia in schools and communities. Everyone is invited to celebrate diversity by wearing a pink shirt.

Members of Earl Beatty’s Gay Straight Alliance (GSA) will visit classrooms to encourage students to create signs that convey their own anti-bullying messages! Pictures of these signs will be shared around the school. Parents and families can create signs at home and send them with Mr. Nore.

Help make Earl Beatty inclusive, safe, and welcoming for all!

Important Dates to Add to Your Calendars

LEAF (Local Enhancement & Appreciation of Forests) is host a workshop on:

Benefits of the Urban Forest

What is the urban forest and why does it matter? Join us to learn about Toronto’s urban forest and the benefits it provides our city. Find out how you can help it thrive by getting involved in LEAF’s planting, education and stewardship programs.

6:45 p.m.            Other Business
At the request of parents we will open the floor early in the meeting to allow participants to raise non-agenda items for discussion.  Items that are already on the agenda will be parked for later discussion and the time allotted will be limited to 30 minutes, after that items will be parked for later discussion.
·       Hot Lunch Program – Rick Chandler
Real Food for REal Kinds information 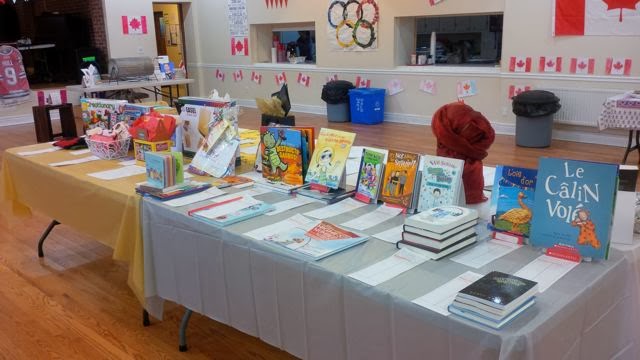 On Saturday February 22 the auction committee packed up and moved into Holy Trinity Church basement on the corner of Monarch Park and Glebeholme. What followed was an evening of fun, excitement as the raffles were drawn, great food and drink and a lot of money raised for our school! 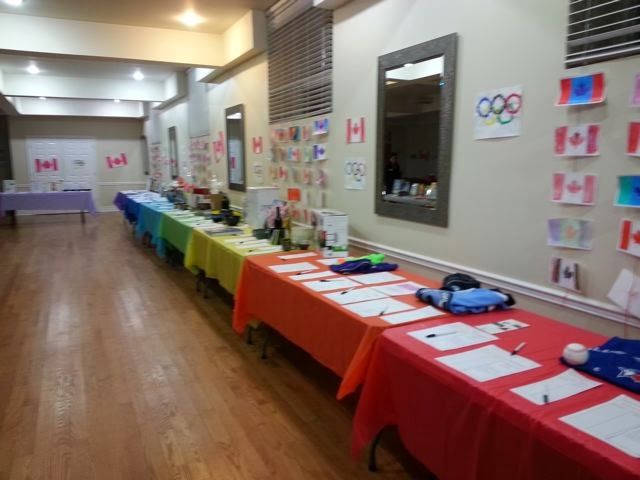 Mr Nore was our distinguished auctioneer for the live auction portion of the evening. Ms Brown organized all the decorations with Earl Beatty students and made our venue look awesome! 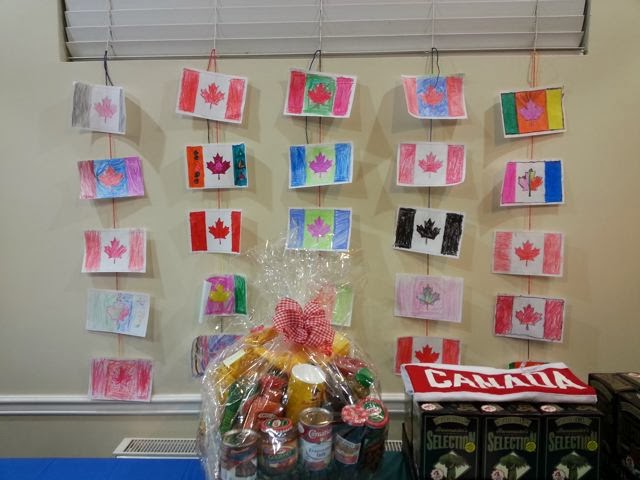 Special thanks to our auction committee members: Helen Antonaides, Nancy Lalicon, Marie Bohlender, Claire Vowles, Krista Faddies, Jen Thompson, Caroline Riley, Zenobia Homavazir, Carla Eastwood and Jody Parekh who worked loads of hours and put so much into making this event happen.
The final numbers aren't in yet as we are still receiving payment for last minute auction items but so far we have over $10,500 and counting!
It was a fun evening! Great job Earl Beatty! 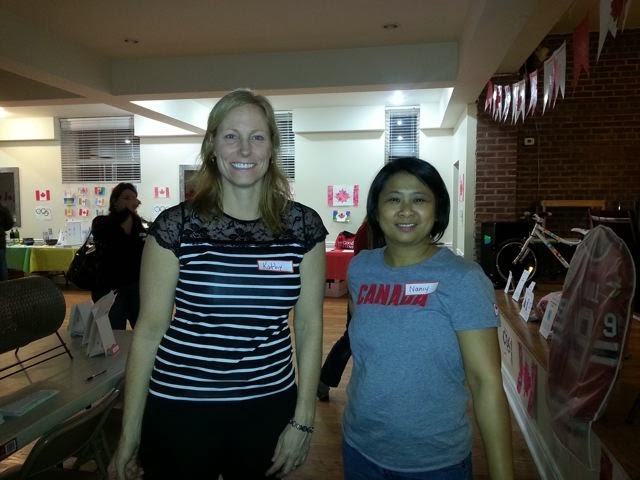